The Red Indian Lake Heritage Society was first formed by citizens of Millertown in 1990, seeking to promote knowledge of history and heritage of Millertown by preserving artifacts, photos, and stories from the past. The first project carried out in 1990 was the production of a book called Heave Out. In 2009, a community museum names the Lewis Miller Room was opened in Lakeview Hall to showcase our collections. It is open to the public from June 28th to September 6th, 10 a.m. to 6 p.m. daily. Fundraising is a major part of the Red Indian Lake Heritage Society. They are selling tickets on approximately 16 cords of firewood that was donated by Firewood Enterprises for $5 a ticket. Also, there are tickets on a handmade bedspread that has been donated by Edna Dalley. They are being sold for $1 each. Currently, the society is doing a number of things to help our environment. A pilot recycling project has been started. Recycling bags are distributed to the citizens of the town and picked up once a month. This project has proven to be a success. By picking up recyclables for the months of June and July, the Heritage Society has been able to keep 4106 cans/tetra and 310 bottles out of the landfill. They would to thank the community for their support in this project.

Millertown has a rich history of logging dating back to in the 1900’s when Lewis Miller built a steam saw mill establishing the community as a lumbering town in Newfoundland. Besides the lumbering history,the area is also known as the last winter home of the Beothuk people. Indian Point, a historic site 2 km from Millertown, has 5 storyboards placed to tell the story of Beothuk people. 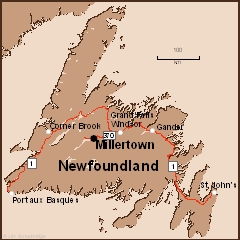